the (hi)story of the Flotten strasse (so far...) 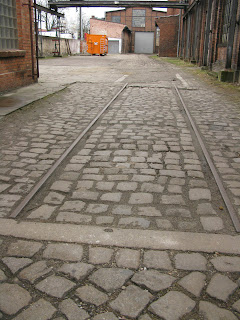 This is what I have discovered about Flotten Strasse so far (special Thanks to Marcus Kern who helped with a very late night Internet excavations and translations):
There were a whole series of forced labour camps built in the area around Flotten str, started 1939 and was significanty expanded in 1941 and 1942. FlottenStr 28 was specifically a forced labour for foreign prisoners as opposed to national prisoners. Because the factory produced aircraft gear, the Germans tried to protect it, which is probably why some buildings have survived the allied bombing.

Flottenstr. 28 is refered in the book 'Des Ort, Des Terrors' as a "Women-sattelite-camp".
1944: 800 Hungarian female Jews and a few Polish women. The Hungarian Jews were transported there from Auschwitz. The number of inmates stayed constant at around 800 until Feb 1945. In March 1945 there were less, only 750 women, then just before the camp was dissolved, there were 743 women registered. Argus Motorenwerke was owned until 1938 by Dr. Moritz Straus, one of the most highly regarded airospace industrials. Moritz Straus was Jewish. In 1938, the German government disowned him and Moritz Straus fled to the US.
The money was given by the Deutsche Bank to fund the Argus Motorenwerke company and the company was run by CEO Heinrich Koppenberg until 1945. 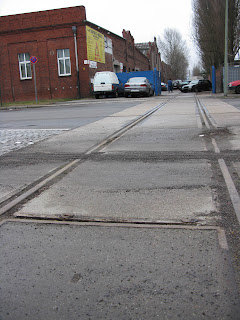 It also describes the camp: one could see into the camp when travelling with the S-Bahn between Alt-Reinikendorf/Shoenholz and Wilhlmsruh/Schoenholz. Around the camp was a double fence with white insulators. The fence was electric.
The women were guarded by female secret service. The SS women suppressed any conversation between prisoners. The prisoner heads were shaven and they wore concentration camp clothing and thin wooden flipflops. The women had to do physical work for 12 hours a day, were visibly malnourished and were beaten on every occasion. They were not allowed to protect themselves against the cold. They only wore thin clothing.
If they were found wearing other bits of cloth against the cold they were beaten repeatedly. On more then one occasion women died as a result of this. The records show that 15 women died there. Their bodies were stored in the coal cellar. The women there were aged between 20 and 43.
This camp was dissolved on 18/19 April 1945 by Germans. 741 inmates were sent to Sachsenhausen concentration camp which was then liberated by the Russian and Polish troops on 21 April 1945. Many if not all of the 741 women were freed then. The head Nazi at the Flottenstr. camp was Andreas Vollenbruch who was investigated from 1960 onwards. The case was handed to a higher instance in 1969. He died in 1972 before the case concluded.

There were 24 satellite camps in Berlin of Sachcenhausen concentration camp from 1943-1945.

We then discovered something else: 28-42 Flotten strasse was a dorm/centre for the asylum seekers, which were ‘evicted’ in 1981. The German equivalent of the Refugee Council led a protest against the closure, but they were not successful. I have been in contact with them, and am hoping to make a visit soon and find out what happened to the asylum seekers, were they deported, how long were they there, why was the place closed, where are they now, is that possible to know, why should one want to know?

I feel deeply drained and upset after these excavations, and at the same time even more compelled to go on. On Thursday I will go back to the Flotten strasse, as the buildings manager said that I can come and have a look inside. I also will visit the local museum's archive to see if I can find out more about this place and its many tangled histories.